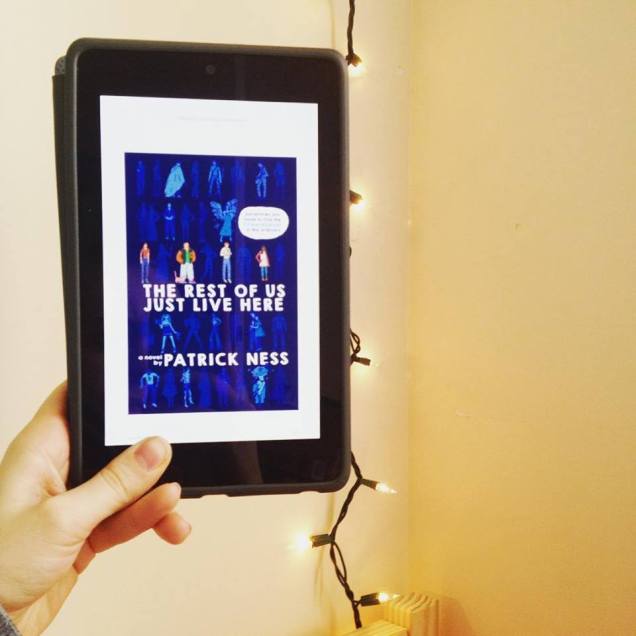 Alright people, this is one of those books where I could take it or leave it, but overall it was a good read.

The Rest Of Us Just Live Here is about four friends who are not the chosen ones and are not supposed to save the word. They leave that to Indie kids. So while the indie kids are battling and trying to save the world, these friends are just wanting to go to prom, graduate, and enjoy their last summer together.

The story is narrated by Mikey, who feels like he is always the least wanted person in the group, that he depends on and loves everyone more than they do him. He also gets stuck in these loops of washing his hands over and over until he can get it perfect or counting all of the telephone poles on his way to school.

This book was introduced to me as directed toward a middle school audience, and while the story is written in that style it deals with a lot of topics that I would not let my middle school siblings read. Mostly sex and random, unneccessary comments about sex. ugh.

Now I freaking love Patrick Ness, so so much, but I’m a little disappointed in this book. It just wasn’t wow for me.

One thing I really want to talk about is Mikey’s loops. I relate to Mikey so hard. So. Hard.

Growing up I had to do everything multiple, multiple, strenuous times. I had to make sure I touched both feet on every line of a cross walk, I had to touch everything four times, I even had this thing where I couldn’t stop scrunching my nose. You can ask anybody in my family about this really weird period in my life. It was so weird and I have family photographs to prove it.

I also have always felt like the background character in the story of my friends’ lives. I wanted so much to be wanted and loved as much as I wanted and loved them. Then I grew up and realized it wasn’t all about me, but I still find myself struggling with the loops and the fear of being the least wanted.

While I didn’t particularly enjoy this book and I can’t see myself recommending it to any of my friends I have to say that in this four-months I have lived in New York City I have never missed my train stop coming home. But I was on the last few chapters of this book and when I looked up I was way past my stop. I had to get off and get on the train going back towards home. So, it does get you sucked in haha.

I am going to end this review with one more thing:

Mikey’s best friend is the grandson of the god of cats. Need I say how amazing this is? I think not.

“So I just let go. My feet skipped to the frantic tempo…And then I was laughing too. It was the sound made by a girl who hadn’t lost a brother. A girl who wasn’t angry, who hadn’t had her world upended.”

I’ve been trying to think of what I could say about this book. Some basic background information that you should know is that this is the third January in a row that I have read this book. The first time I read the story of Finley Sinclair was shortly after my great-grandmother passed away and I was struggling with some of the same things that Finley was and this book brought me so much healing that for whatever reason I can’t not read this book at the beginning of every year and every year it has a different meaning to me.

There You’ll Find Me is about eighteen-year-old Finley Sinclair, hotel heiress, who following the death of her brother Will, has a wild year. Putting that party year behind her, she decides to study abroad in Abbeyglen, Ireland to follow the travel journal of Will and try to reconnect with God.

On the plane ride she meets Beckett Rush, teen heart throb and Hollywood bad boy who is wrapping up filming for his vampire saga in a nearby town. Finley is the only girl who is seemingly immune to Beckett’s charm, so he convinces her to be his personal assistant in exchange for him being her tour guide around Ireland.

“’I believe this is yours?’ I looked up and saw Becket Rush standing over me, my rogue suitcase beside him. ‘How did you know that was mine?’ ‘I just got a hunch.’ His arrogant smile quirked on his lips. ‘Like when I saw you nearly swan dive onto the conveyer belt.’ ‘Your vampire instincts are uncanny.’”

Between perfecting her audition piece for the Manhattan music conservatory, the pressure of school, healing from her brother’s death, reconnecting with God, and whatever is going between her and Beckett, Finley slowly starts to crumble.

“What if it fell? What if the breeze took it away? I was that kite. Fragile against the wind. Soaring one minute. Spiraling straight down the next. Just looking for something to hold me up.”

To cope with everything, Finley starts to control the little things that she can- her weight, diet, her exercise. Throughout the book there are side, underlying comments about her eating less and less and running more and more. This is probably my favorite part of the book because Finley’s border-line anorexia slowly sneaks up, in and out throughout the story and blows up on you at the end, exactly like real life.

“Last year I would occasionally forget to eat. My counselor called me depressed. I called me devastated.”

I love this book for many reasons. The first reason is because the characters are funny and real, it deals with real issues like depression, perfectionism, eating disorders and grief. The core of There You’ll Find Me is not a sweet love story, but the healing of past wounds. We look at the healing between father and son, sister and sister, and a girl losing her best friend. I also loved the focus on Christ and her trying to find herself through God. I like how Jenny B. Jones breaks the YA mold and brings Christianity into the equation.

Okay, don’t freak out, but it’s about to get all sorts of personal right here.

To be completely honest, when I read this book it feels like I am narrating, not Finley. In the months after my great-grandmother passed away I didn’t know how to deal with all of the emotions going through me. I started eating less, not necessarily to lose weight, but because I had no appetite and it was one thing I could control in my life. I also started running multiple times a week at long distances to get out of the house and think. I liked the feeling of being exhausted and hungry after a run. This parallel between Finley and I was and is crazy to me.

The first time I read this book I didn’t realize that depression and eating disorders were a thing, I had never heard of it before. I know, kind of crazy. But seeing myself in Finley helped me deal and understand what I was going through and the danger of my decisions.

“He told me to stop growing up. And then he died. And I’d grown up overnight.”

At the beginning of this review I said how every time I read this book, it has a new meaning for me. This year was something I never noticed before. I moved to NYC four months ago and until the day before I booked my ticket New York was not on my radar. I couldn’t care less about it, so in reading this Manhattan wasn’t a noteworthy name to me. But now that I live in Brooklyn and work in Manhattan my mind was almost physically blown haha. Also when this conversation between Finley and her host sister happens:

“You know, we’re surrounded by people, but it just feels so… lonely here.’ Erin lifted her head, giving me a faint, thoughtful smile. ‘Only if you let it.’”

I could not help but apply that to NYC.

Wowza, this is a long review. Sorry not sorry?

I 100% recommend this as a positive, clean read. I think that even non-Christians will be able to relate and will fall in love with this book.

“’Are they playing hymns or something?’ She put some new sheet music in front of me. ‘Depends on who’s doing the listening.’”

P.S. This book is totally for Bookshelf